On August 8th, we were lucky to see a show that we’d been anticipating for the past few months. Miserable, Death Bells and Fearing toured their way up the West Coast and found themselves at The Biltmore Cabaret in Vancouver. What followed was a night of amazing music and rad people and I just want to say thank you to everyone who came out and who was a part of making this show happen <3

Miserable will be in Mexico with Death Bells for 4 live shows.
More info @ sargenthouse.com/miserable

Kristina Esfandiari’s journey to actually get her record together literally was lit… and not in a good way, the Hard drive caught on fire. Through paths of determination she has delivered Loverboy, an EP of songs of sadness and strengths. Her fire further fueled by loneliness and the exploration of previous traumas. We got ahold of her while on her tour to have her explain her give us a run down on creating her EP.

Since we first met years ago, you’ve lived in the Bay, New York and now LA. Does long distance relocating tend to boost your creativity or crush it?

I suppose I’d say it does both. You have to start over when you move, that can be distracting. Establishing yourself in a new city takes time. On the other hand, I wrote some of my favorite songs while feeling very isolated in NYC. 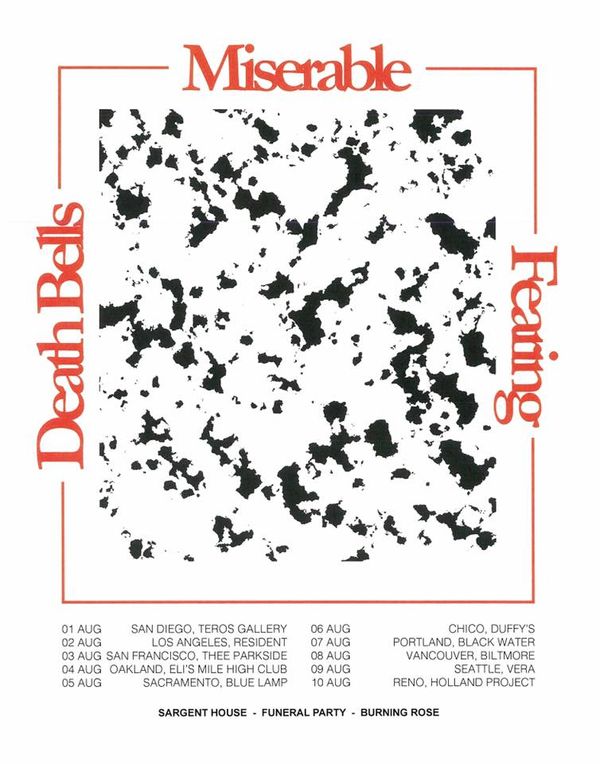 Miserable has just announced a tour with Death Bells and Fearing. Dates below:

Miserable is the latest project of Kristina Esfandiari (who also performs as King Woman), and "Violet," off her upcoming debut LP, is a bitter requiem for a deep friendship. She wallows in its molasses reverb and delayed lurches…

Kristina Esfandiari is probably best known as the vocalist of bleak rockers King Woman, as well as being a former member of shoegaze outfit Whirr, but her solo work as Miserable should be held in equal regard. Making its debut with 2014 EPs Halloween Dream and Dog Days, the project now returns with Uncontrollable, a nine-track work of dizzying lo-fi sadgaze. The tracks unfold slowly, and with a palpable sense of purgation. The work picks up steam with lead single “Violet, rumbling from somewhere deep, while bleating chords underscore Esfandiari’s gruff vocals: “You’re the most spiteful person / I could never be.”

MISERABLE is the solo work of Kristina Esfandiari, the vocalist from King Woman. Her new album, entitled Uncontrollable, hits the streets on April 29th via The Native Sound. I will tell you this: Esfandiari has created a…

Full article via The FADER

It’s a boundless track about “reminiscing on how beautiful things were and how they’ve faded from your life” from her upcoming LP Uncontrollable.

The Bay Area's Kristina Esfandiari (of King Woman), who makes dark folk as Miserable, is following up a series of EPs under that moniker with the debut full length Uncontrollable. The new LP is, like the name of Esfandiari's project, quite sad. But not the kind of sad that gets you all humdrum glum; these nine songs are a cathartic release of heartache and frustration born from insecurity and loss.

Last year, King Woman's Doubt EP had a profound impact on me, thanks to vocalist Kristina Esfandiari's throaty croon and candidness about the experiences that shaped her life as an artist. It was easy to sink down into the velvety embrace of the album's lush, brooding dark folk, and finding out that she had a whole other band, Miserable, felt like a gift.

Whereas King Woman goes for an earthier approach, Miserable floats along on an airy, almost celestial path; "shoegaze" is as good a description as any (especially given Esfandiari's status as Whirr's former vocalist), but this is no mere Loveless clone. The band's upcoming new album, Uncontrollable, is desperately sad, and blissfully lovely—and the juxtaposition is sometimes startling, especially on dreamy reveries like "Oven," whose breathy chorus wonders if the narrator should "stick my head in the oven."

Kristina Esfandiari used to sing for Bay Area shoegaze greats Whirr, but she separated from that band to forge her own path as Miserable. The name change is apt; “Bell Jar,” a preview from Miserable’s Halloween Dream 7-inch, is…